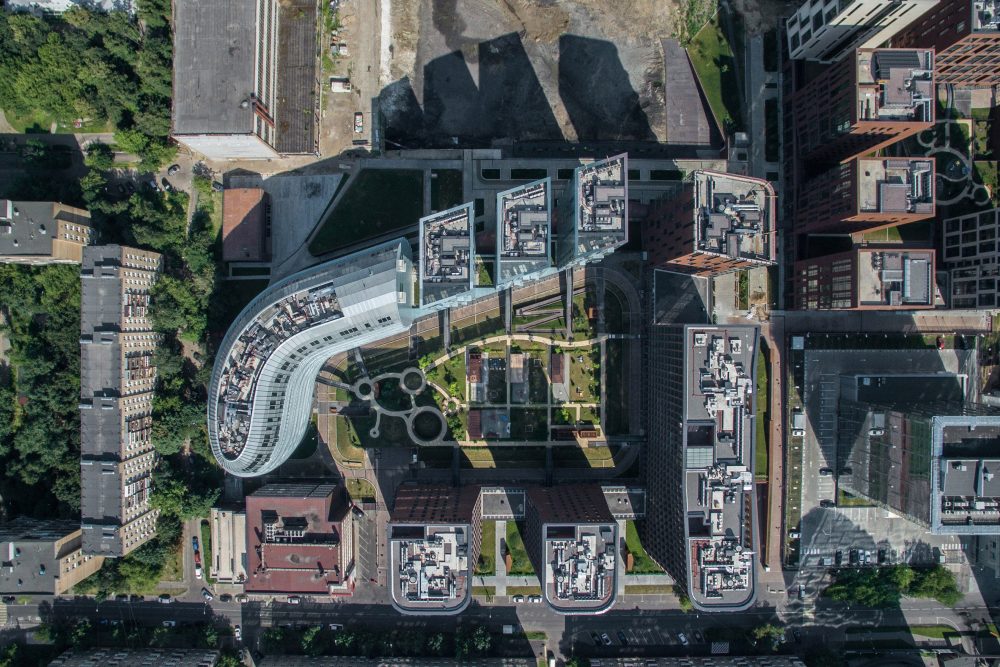 In his book Spying on Moscow: A Winged Guide to Architecture takes you through the architectural history of the Russian capital city. The bird’s eye perspective images were taken with a Zenmuse X3 drone camera and feature buildings from the city’s constructivist era alongside contemporary designs by architects including Zaha Hadid and David Adjaye.

The alltogether 70 buildings illustrate 100 years of construction in Moscow and are quite impressive when seen from above. One of the key projects captured is the self-designed home of architect Konstantin Melnikov, Melnikov House. Completed in 1929, it features a pair of cylindrical volumes, with the larger punctured by hexagonal-shaped windows. A perfect example of constructivist architecture.

The drone imagery also reveals the star-shape and green roof of Moscow’s largest theatre, The Central Academic Theatre of the Russian Army. Built in 1929, the theatre forms one of the first examples of Stalinist architecture – the style that was developed in the Soviet Union under Joseph Stalin in the 1930s and 1940s.

Contemporary designs in the book include Zaha Hadid Architects‘ Dominion Office Building – a seven-story office block conceived as a series of vertically stacked plates that was completed in 2015.

Another modern building is the Skolkovo School of Management, Moscow’s graduate business school, which was designed by British firm David Adjaye Associates in 2009. It is made up of four volumes of different sizes set on a circular base.