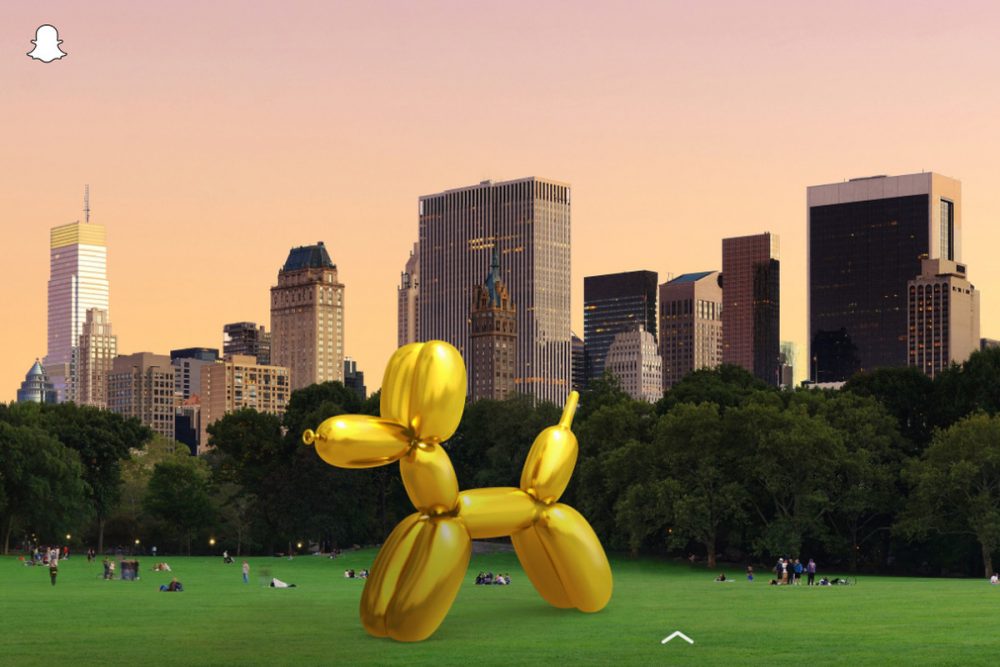 Snapchat is bringing Pop Art to its platform.

On Tuesday, Snapchat announced a new partnership with the iconic American artist Jeff Koons, known for his stainless steel sculptures of balloon animals.

Some of Koons‘ most famous sculptures will now appear within the Snapchat camera when a user is at a certain, major park or landmark in countries such as the U.S., Canada, U.K., Paris, Australia and Brazil. More worldwide locations will be added, the company said.

Each included location, like Central Park in New York City or the Eiffel Tower in Paris, will feature one of Koons‘ sculptures, such as a balloon dog, swan or rabbit. Users must be within about 300 meters of the Lens and have the latest version of the app installed to see the art.

The lenses are an example of the way Snapchat is trying to remove friction from the creative process,” Evan Spiegel, founder and chief executive of Snapchat, said at a news conference at Vanity Fair’s New Establishment Summit on Tuesday. “The fact we can bring these ginormous sculptures anywhere in the world is just the beginning of inspiring young people all over the world to create with our cameras.”

Users are able to take photos of themselves with famous Koons sculptures — like “Balloon Dog”, “Rabbit” and “Play-Doh.” Some of their locations also include Millennium Park in Chicago, the National Mall in Washington, the Venice Boardwalk in Los Angeles, Hyde Park in London and Copacabana Beach in Rio de Janeiro. The sculptures appear to be about three stories tall.

As Snapchat’s rivalry with Instagram has intensified, it has tried to add more unique features such as photo-editing tools, 3D filters and augmented reality capabilities like the partnership with Koons.