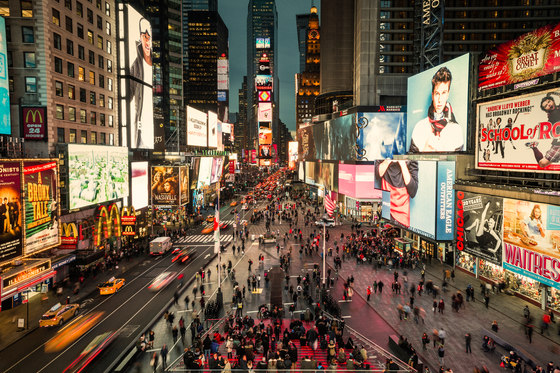 With an average of 45 million visitors each year, Times Square is the most visited destination in New York and the United States. Following the closure of Broadway to car traffic in 2009, Snøhetta began to reshape the traffic junction.

The company’s design for the permanent pedestrian plaza cleared out decades of old infrastructure cluttering the square while creating a unified ground plane from building front to building front. Ten 50-foot long granite benches allow pedestrians to move through the area more comfortably, complementing the energy of the lights and excitement above.

Since completion in 2016, the reconstruction has doubled the amount of pedestrian-only space at Manhattan’s core. The design has transformed Times Square from one of New York’s most notoriously congested spaces into a radically open civic square, while also integrating crucial utility and event infrastructure upgrades.

The project site, known as the “Bowtie,” forms the heart of the Times Square Theater District, and is bounded by Broadway and 7th Avenue between 42nd and 47th street. Since the Bloomberg administration closed Broadway to vehicles in May 2009, and the first section of Snøhetta’s pedestrian street opened to the public in spring 2014, the transformation has already had a significant impact on public safety, economic output, and user experience.

Pedestrian injuries have decreased by 40%, vehicular accidents have decreased by 15%, and overall crime in the area decreased by 20%. And with the removal of vehicles, air pollution in the Bowtie area has fallen by as much as 60%, making the space safer and healthier for everyone. Over 80% of visitors now agree that the pedestrian plaza makes Times Square feel safer.

Snøhetta’s design is inspired by Times Square’s past and its rich entertainment history – a duality that inﬂuenced both the larger concept and the project’s details. Times Square’s signature buildings and spectacular signs – the glowing walls of the Bowtie – create an outdoor room right in the heart of Manhattan. Snøhetta’s design creates uncluttered pedestrian zones and a cohesive surface that reinforces the Bowtie’s role as an outdoor stage. This clear and simple ground surface made of precast concrete pavers creates a strong anchor for the space, allowing the excitement of Times Square’s commercial components to shine more brightly above.

New power and broadcast infrastructure embedded in the benches eliminate the need for diesel generators, temporary power cables, and broadcast equipment, enabling swift and efficient set-up and breakdown of the over 350 public events that take place in the Square annually. With a significant positive impact on public safety, air quality, and economic output, the project has transformed Times Square into a world-class civic space that reﬂects the best of Times Square and New York City.